A hotel which unwittingly hosted a gathering of Britain First members has decided to split the the revenue generated by the booking across three charities, including the Jo Cox Foundation.

The organisation booked a room at the Wyboston Lakes resort, Bedfordshire, under the name Patriot Merchandise for £2,250 at short notice. The hotel was then criticised on social media after images were shared of the conference by its leader Paul Golding with banners which read: ‘Taking Our Country Back!’

The hotel announced in a Facebook post that it had rounded the £2,250 fee up to £3,000, and would give £1,000 each to the Joe Cox Foundation, homeless charity Beyond Food and the Bedfordshire and District Cerebral Palsy Society.

Jo Cox was a Labour MP who was fatally shot and stabbed by 52-year-old Thomas Alexander Mair in 2016. Mair had connections to far-right groups including the English Defence League and National Front.

Wyboston Lakes said that the booking was made at the last minute under the business name Patriot Merchandise and insisted that no members of staff entered the room while the conference went on. 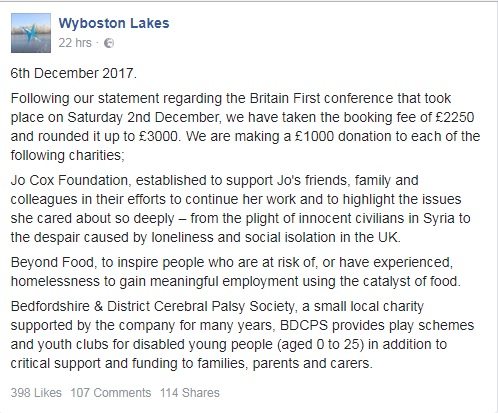 The ‘new normal’ for hospitality

Essential cybersecurity guidelines to protect your business when working remotely

Colliers calls for ease of planning restrictions on hoteliers