Now fully reopened following a devastating fire in June last year, ALESSANDRO CARRARA looks at what happened at London’s iconic Mandarin Oriental Hotel and how it’s not the first time the property has been able to bounce back from a fire

In June 2018 the Mandarin Oriental Hotel in London’s Hyde Park was rocked by a devastating fire which tore through the building and left it out of commision for nearly 10 months. Now fully reopened, here is everything you need to know about what went down and how the property was able to recover.

The building was originally commissioned in the late 1880s, with construction initially delayed due to fears that its height would cast a shadow over the Serpentine, a 40-acre recreational lake in Hyde Park.

The property finally opened in 1889 as an exclusive block of apartments for affluent bachelors, before opening as a hotel, with its own private royal entrance, in 1902. In 1996 the Mandarin Oriental Hotel Group purchased the property and conducted a full £57m renovation, consequently re-opening in May 2000.

At 3:55pm on Wednesday 6 June, London Fire Brigade was called to reports of a fire at the iconic London hotel, with crews from Chelsea, Kensington, Hammersmith, Battersea and other surrounding fire stations quickly rushing to the scene. At the height of the fire more than 20 fire engines and 120 firefighters were at the property tackling the blaze, and it took more than six hours to bring it under control.

Just evacuated Mandarin Oriental hotel to see this…. absolutely crazy! So impressed by the organisation in bringing everyone to safety #knightsbridge #mandarinoriental pic.twitter.com/1837pi4uoD

The smoke from the fire could be seen billowing across the London skyline, and social media was ablaze with numerous videos of the property on fire. Fortunately, all 36 hotel guests and 250 members of hotel staff, including singer Robbie Williams, were evacuated from the hotel after the fire broke out, with no reported injuries.

As to how it all started, the London Fire Brigade said it could have been a result of the renovation works, potentially caused by arc welding landing on the felt lining of a planting facade. The external planting facade was damaged by the fire, in addition to the roof and plant machinery on the roof.

While the fire was confined to the exterior courtyard area of the hotel, with limited impact on the interiors, it came after the hotel had just completed the most extensive restoration in its 115-year history, which saw the five-star hotel’s façade revitalised, and the transformation of its lobby lounge and reception area.

However, this isn’t the first time that the hotel has been devastated by a fire. In 1899, before the property formally became a hotel, a fire broke out at the building, causing damage to the top three floors of the Knightsbridge wing and destroying part of the roof. Miracuously, all guests were able to escape, despite the fire brigade’s ladders only reaching halfway up the building. 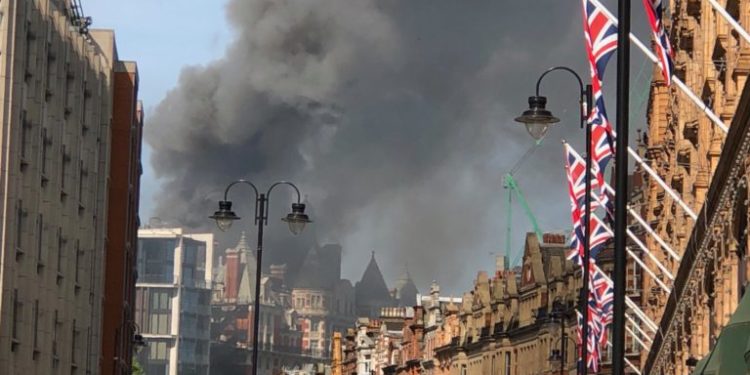 The hotel said it was “delighted” that its Dinner by Heston Blumenthal, Bar Boulud, London, The Rosebery, Mandarin Bar, The Spa at Mandarin Oriental, London and all of its event spaces would reopen on Tuesday 4 December, “in time for the festive season.”

Things settled down after that, and on Monday 15 April the hotel finally completed the most extensive restoration in its 115-year history just 10 months after the fire ravaged the hotel. It even unveiled all new guest rooms and suites, including two newly created penthouse suites. Internationally renowned designer, Joyce Wang, has overseen the redesign of all guest rooms and suites, along with the creation of the hotel’s new penthouses.

It was certainly a tumultuous 10 months for the hotel, and commenting on the grand reopening, general manager Amanda Hyndman said the “scope and intricate detail” of renovation has been designed to ensure the iconic London establishment is “recognised as one of the finest hotels in the world”.