The quaint and quirky hotels of Britain

Following news that a cheese-themed hotel would be launching in London this month, Heather Sandlin decided to take a look at some of the most unique boutique hotels that Britain has to offer.

Café Rouge made waves when it announced the launch of a cheese-themed hotel in Camden, London, earlier this month. The Cheese Suite really is what it says on the tin: cheese-themed wallpaper, throws and cushions complement cheese cookbooks, boardgames and bedding.

The experience opens for nine nights only. But never fear, we took a look at some of the weird and wacky hotels that you can visit any time of the year.

Bertram’s Hotel is named after the Agatha Christie novel of the same name, and murder-mystery aficionados are in for a treat with this retro-decked, double-decker bus. The bus itself, located in the heart of Christie-land, Devon, is a direct mirror of the 1965 novel’s cover.

The ground floor of the accommodation holds a master bedroom and day bed, alongside a cocktail bar and record player for that extra slice of Sixties glamour. On the upper deck, guests can enjoy a home-cooked meal prepared in the retro kitchen. There is even a hot tub available on request, while free-roaming alpacas, goats and donkeys surround the grounds. Perfect for a good old fashioned murder mystery night in. 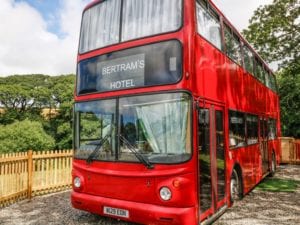 Honoured to be the “world’s only” Beatles-inspired accommodation, the Hard Days Night Hotel is a Mecca for music fans everywhere. The Liverpool site sits adjacent to the world famous Cavern Club where the Fab Four first carved out a name for themselves. 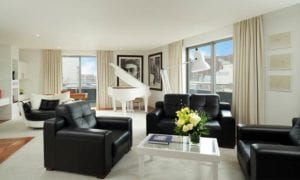 Stargazers and animal-lovers alike will be enthralled by the sights and sounds at Port Lympne Hotel and Reserve in Kent. Set within the vast grounds of the reserve, The Bubble accommodation offers 180-degree views of the 600-acre surroundings, with completely transparent walls and ceilings offering an up-close and personal view of roaming wildlife.

Cheetahs, rhinos and giraffes are just some of the 700 wild animals roaming the safari park, which first launched this accommodation in 2018. Each Bubble features a king-size bed, freestanding bathtub and a separate ensuite wetroom. 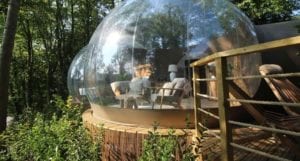 The Wizard Chambers at the Georgian House Hotel have magic and wizardry at the forefront of their offering. The entrance itself is concealed behind a secret bookcase, tucked away on the ground floor of the 19th Century London hotel.

Guests are greeted by a “portrait-lined passageway” bathed in candle light, with each of the seven available rooms boasting prominent gothic features, such as stained glass windows, stone arches and four-poster beds. Cauldrons and tapestries complete the magical theme. The hotel’s Enchanted Chambers offer a smaller, cosier alternative to the larger rooms within the Wizard Chamber. 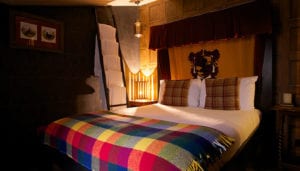 For those who wish to get lost down the rabbit hole, Brighton’s Wonderland House is a sight to behold. The Alice in Wonderland themed hotel consists of six uniquely designed bedrooms spread over five floors, each one adorned with its own quirky touches.

Flamingo lamps, giant teapots, unique illustrations and an array of mirrors tie the whimsical theme neatly together. It even features a Madhatter Banqueting Room that seats 16 guests for afternoon tea, with chairs formed of giant teacups and a silver throne for the all-important guest of honour. The beachfront site is popular with private functions and hen parties. 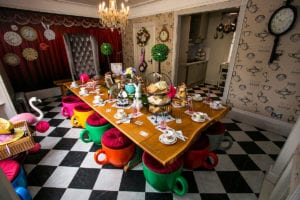 In Warwick Castle’s Knights Village, guests can immerse themselves in a truly Medieval experience. The Knights Village contains 28 medieval-themed timber lodges tucked away in the woodlands of the castle’s sprawling grounds. The lodges opened in 2016, and declare themselves as the perfect location for ‘Medieval Glamping’.

The castle also provides an array of Medieval entertainment, including free archery for adults and children, sword-fighting displays, Knight’s School, Jester’s School and falconry shows. The on-site restaurant even takes the form of a traditional banquet hall, with a carvery feast that is fit for a king. 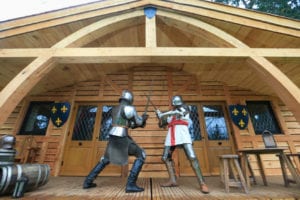