The next step: The Celtic Manor Collection

The Celtic Manor Collection is quickly becoming one of the UK’s most fastest-growing hotel groups. This year alone has seen the acquisition of the former Hampton by Hilton at Magor and the construction of the 5,000 capacity International Conference Centre. Hotel Owner sat down with Matthew Lewis, VP of operations to find out more.

“The new International Conference Centre Wales will be a game-changer,” says Matthew Lewis, who was appointed to the role of vice president of operations for the Celtic Manor Collection earlier this year. “Not just for Celtic Manor but for Wales as a whole. It will transform Wales into a true destination for business events and bring an estimated £70m per annum to the Welsh economy, including 100,000 additional bed nights.”

The Celtic Manor Resort was built on the vision of Sir Terry Matthews, a technology entrepreneur who was born at the original hotel, the Manor House, when it was a maternity hospital. He noticed it was boarded up and for sale and thought it was a great location for a hotel as it was so close to Junction 24 of the M4 motorway to attract passing traffic.

The original hotel, with just 17 bedrooms, opened in 1982, and quickly expanded to 70 bedrooms when a conference suite and health club with swimming pools were also added. That was just the start of the expansion – in 1999 the vast, five-star Resort Hotel opened with another 330 bedrooms, luxury spa and a state-of-the-art convention centre for 1,500 delegates.

Golf courses, a clubhouse and a golf academy had already been built by this time and when Celtic Manor was chosen to stage the 2010 Ryder Cup back in 2001, the golf offering increased to three championship courses – the Twenty Ten, the Montgomerie and the Roman Road.

In 2014, the hotel opened 10 luxury Hunter Lodges – all with four double bedrooms and outdoor hot tubs – to give another accommodation option to the families filling the hotel at weekends and during school holidays. One of the first people to stay in the Hunter Lodges was former US President Barack Obama when he attended the 2014 NATO Summit.

Since then the business has expanded to include a total of four properties. The Celtic Collection now includes the main Resort Hotel with adjoining Manor House, Coldra Court by Celtic Manor, the Newbridge on Usk country inn restaurant with rooms and the newly acquired Tŷ Hotel at Magor.

Personally, Lewis explains his journey with Celtic Manor began in 2006 with an “aching ambition” to be part of the team that delivered a Ryder Cup, which he did in 2010 before being promoted to the role of director of Golf, Spa and Leisure.

With an “ever-expanding” business, he took on the role operations director in 2013, overseeing the entire Celtic Manor Resort operation including the development of a new restaurant and leisure market concepts, and the acquisition and refurbishment of the Coldra Court Hotel by Celtic Manor. 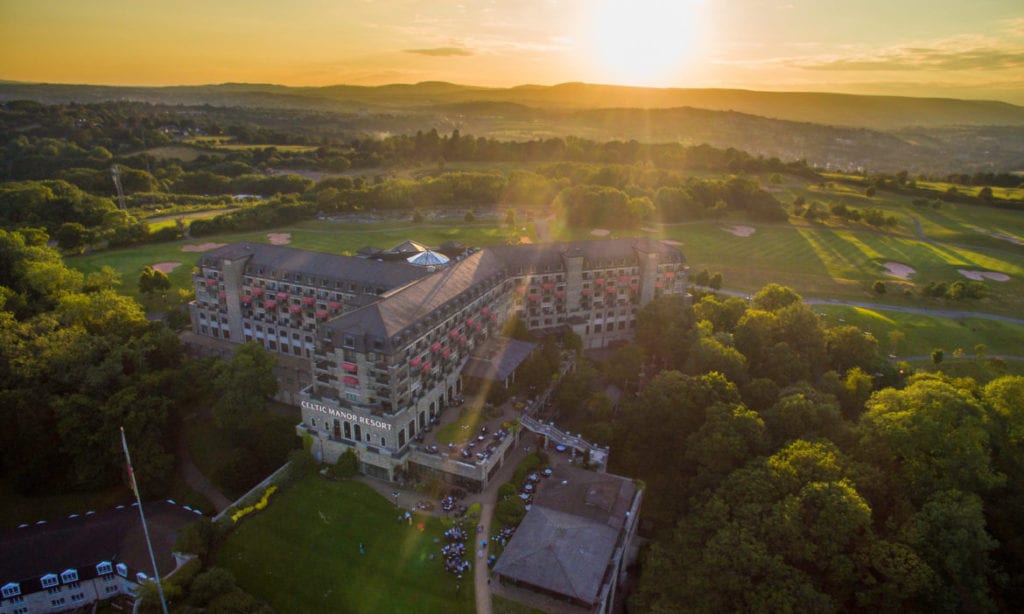 The final step happened earlier this year, when he was promoted to the role of VP of operations. “Whilst continuing to oversee the operational delivery across our current portfolio, I am also heavily involved and leading a number of projects that relation to the expansion of the Celtic Collection,” he explains.

What makes The Celtic Manor Resort and The Celtic Collection “distinct” from other hotel groups is that they remain a privately-owned, independent family business, says Lewis, which gives them opportunity to “act swiftly and dynamically” in multiple areas like acquiring new hotels and developing new facilities.

“Being privately owned also helps us stand out from the crowd of chain hotels and present something different. We are a unique business in terms of the size of the main resort combined with the conference and leisure facilities built within and around it. For instance, we have seven restaurants which allows us to offer a variety of menus and something to suit everyone.”

He also cites the fact that the company has won the Gold Award for Best UK Hotel at the Meetings and Incentive Travel Awards for eight of the last nine years, showing how “well-regarded” the Manor Resort is as a conference hotel, with their leisure business running at around 90% occupancy on average.

“The leisure and conference sides of the business dovetail nicely because you tend not to have conferences at weekends and during school holidays which are, of course, our peak periods for leisure guests,” he notes.

Over the years Lewis says the group’s growth has been “largely organic” and driven by the continued success of the business developing new facilities and accommodation options on site. However the company did acquire a former Hilton Hotel just a few minutes away from the main resort in 2016, which it rebranded as the Coldra Court Hotel by Celtic Manor. 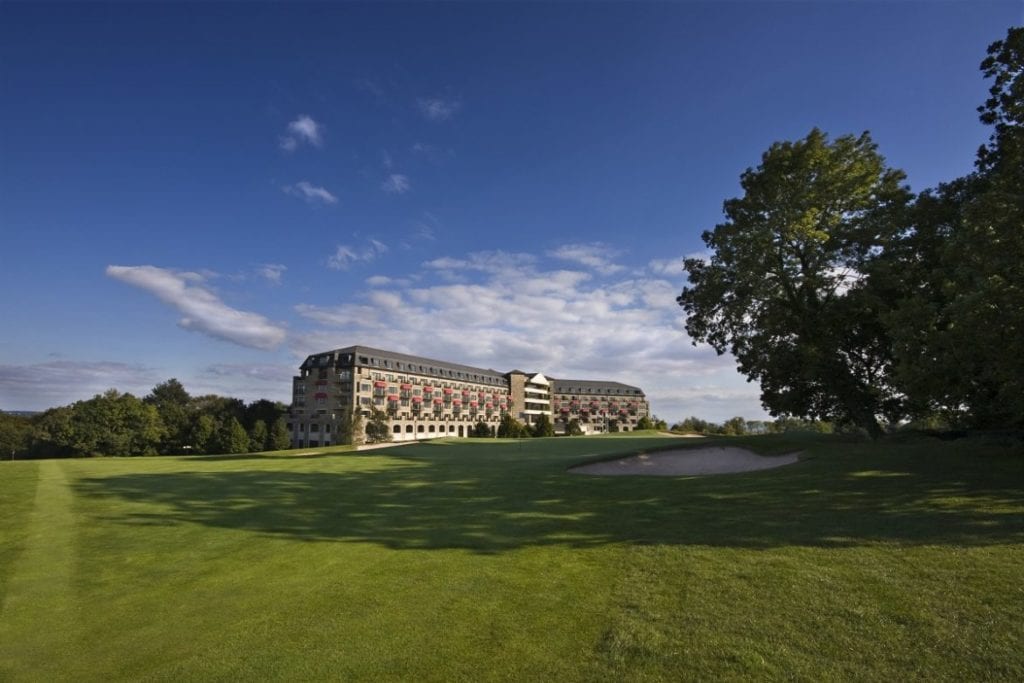 The property embarked on an immediate refurbishment of the entire bedroom stock and Celtic Manor created a new restaurant concept to bring it more in line with Celtic Manor’s standards.

“Although it is marketed separately as a four star hotel, we have found some guests’ expectation has been for the full five-star Celtic Manor experience,” remarks Lewis. “We have used this experience to redefine our brand position.”

Learning from this, its latest expansion is very much a mid-range offering and to ensure that its guests are aware of this, Celtic Manor launched a new brand called ‘Tŷ Hotels’ under the Celtic Collection umbrella.

Lewis adds: “We have already started building a second Tŷ Hotel next to Coldra Court close to the main resort. Further developments, acquisitions and partnerships are definitely on the horizon, and our ambition is to continue to grow and develop this mid-range brand over the coming years.”

Tŷ is the Welsh word for ‘house’ and the name aims to reflect a “new style of essential, mid-range hotel, recognising everyday needs with accommodation designed for easy, short stays”.

Lewis describes that Tŷ is aimed primarily at “people visiting for a purpose” and staying one or two nights when they need a comfortable and functional resting place while attending a meeting, conference, concert, family get-together or sporting event.

The Hampton by Hilton at Magor became the first Tŷ Hotel branded hotel in the Celtic Collection earlier this year. Due to the “good condition and well-run nature” of the hotel at Magor the transition of the property into the portfolio has been “fairly seamless”.

“We have retained the staff and management at this hotel and incorporated them within our own team and there are no plans to make major changes to the facility or its operation. Within days of assuming ownership of Tŷ Hotel Magor, we began excavation works ahead of constructing a second Tŷ Hotel next to Coldra Court Hotel so the brand is off to a flying start.”

The new Tŷ Hotel Newport is set to open in the autumn of 2020 and will deliver an offering that is very recognisable to those guests who have stayed at Tŷ Hotel Magor.

Continuing on the company’s plans for growth, Lewis says “with an owner like Sir Terry Matthews, this business never sits still and there are ambitious plans for further growth in the next five years. The Celtic Collection will continue to grow and expand further afield.”

He explains that looking ahead the plan for the company is to move in a new direction in managing hotels that they do not own, with its first management contract, which it is close to confirming, set to see it operate the planned new Westgate Hotel in Cardiff. The hotel is located next to the Principality Stadium has just secured planning permission and is being developed by the Welsh Rugby Union and a property firm, Rightacres.

“We are also discussing a number of opportunities with potential owners and developers who are looking to work with us on projects across the Celtic Collection, whether that is a destination resort, an upscale hotel or a mid-range property as part of our Tŷ Hotel brand.

“As a team, we have established a reputation for running highly successful hotel businesses and know that we can transfer our model and strategy to other venues and make them successful, too.”

He reveals that the group also has planning permission to build more self-catering lodges on site and is currently exploring other potential developments across the existing Celtic Collection. “As ever, it’s an exciting time to be part of the team, so watch this space for further developments,” he concludes.

Yes, the trade barriers are coming

by Alessandro Carrara
Prev Next
No Result
View All Result

Yes, the trade barriers are coming

Prev Next
No Result
View All Result